Dutch Billys — the game is on! 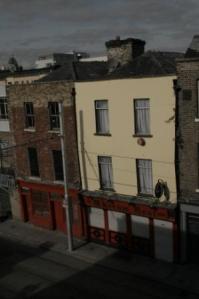 These c.1720 buildings across from the office mightn't have had gables. But look at the massive chimney stack.

I remember well my father tossing the young anarchaeologist a new book he’d acquired with the prophetic words ‘have a look at that!’ Have a look I did and I’m still reading it almost 40 years later, with both of our spines demonstrating similar levels of attrition. It was Elgy Gillespie’s book on the Liberties of Dublin (published by Michael O’Brien, a survivor of the XV International Brigade) and within was an illustrated essay by Peter Walsh on the Dutch Billy tradition in that particular quarter of the city generally located within the older parts of Dublin 8.
Peter’s essay, for the first time perhaps since the publication of the Georgian Society Records (1909-1913), focused on these gable-fronted houses, an ubiquitous feature of the city’s streetscapes until well into the nineteenth century, an architectural form that saw significant levels of survival into the 1950s. Of course, they haven’t gone away and the fantastic work undertaken by the contributors to the Dutch Billy thread on Archiseek – started with an innocent question posed back  in 2003 – has charted their survival behind Georgianised facades all over the city and indeed in many of the towns throughout the country. If you have a few hours, look at this http://www.archiseek.com/forum/viewtopic.php?f=15&t=6813&sid=4afdf7a7429a69204fc32c6105d08f00

The Billy form has continued to intrigue me over the years and as my political consciousness developed I began to see these buildings as ciphers for the hidden built history of the city’s working-class, a narrative dominated by an undue concentration on the Georgian town houses of the elite.
The very term ‘Dutch Billy’, attributed to the late Maurice Craig, is itself loaded with a political nuance, the assumption being that these were the houses of Dutch settlers brought in to the Liberties, protestant followers of King William who imported their own domestic architecture on the early modern town along with their confessional dissent. The identification of the Liberties with the textile industry has led to the misapprehension that the expanded attic spaces housed handlooms and workshops, an idea which seems preposterous today and one that says a lot about common impressions of working class experience in the past.
Elgy’s book was published back in 1973 and a lot has happened in the city since then. Indeed, a lot has happened within the past six months with the demolition of five of these structures in Dublin, a city that hopes to become World Design Capital in 2014. However, things are looking up on the Billy front and the Dublin Civic Trust are to be congratulated on a seminar held on 12 October celebrating this hidden building tradition. 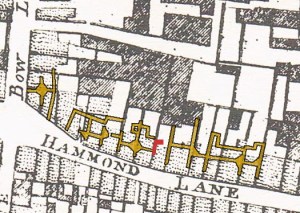 Abi Cryerhall's Dutch Billys superimposed on Rocque (1756). The red bit in the middle is medieval

It was entirely appropriate that the first paper was given by Peter Walsh, who contextualised the form with many illustrations from his own collection. The term encyclopaedic doesn’t do justice to Peter’s knowledge of seventeenth-and eighteenth-century Dublin and many archaeologists working in the Liberties (myself included) owe him a great debt for his unstinting generosity when it comes to discussing the sites and the people who lived and worked there. Peter highlighted the initial Quaker involvement in the evolution of the form, his paper informed by many years spent in the Registry of Deeds, an institution sadly underused by the city’s archaeologists (myself, again, included). The influence of the protestant dissenting tradition is one which is often ignored and it is perhaps apposite that the Liberties of today is a centre of mostly African evangelical worship. Yeah or Nay Street now enters my topographical lexicon along with the Lands of Tib and Tom.

Peter was followed by Niall McCullough, whose classic work on the city, Dublin, an Urban History, was republished in expanded form in 2007. McCullough spoke on the morphology of the capital and contextualised the gable-fronted tradition within a cityscape that was undergoing a fundamental change after the Restoration and beyond. And indeed, what are cities but constantly changing and evolving organisms?

Eastern side of Weaver's Square, looking towards Chambers Street

Peter Keenahan followed with more images culled from his ground-breaking analysis of the form, which perhaps modestly (for an architect), might have included more of his scholarly drawings of the gables that have disappeared from many of the buildings which still survive on the streetscapes of the city. His identification of the little known Clancarty House on Dame Street on Francis Place’s drawing of the Round Church was convincing and the better known lease map drawing of the structure was examined together with this ‘new’ evidence, along with what little of the house can be taken from Joseph Tudor’s depiction of Dame Street. But more on that later.

Graham Hickey highlighted the work of the Dublin Civic Trust in bringing these buildings to a wider audience. Established 19 years ago, the Civic Trust has been to the forefront ‘recognising, promoting and protecting the city’s architectural heritage’ and the survival and reuse of Barnwell’s on Castle Street (now the Trust’s HQ and exhibition space), Nos. 10 and 11 South Frederick Street and 21 Aungier Street attest to the practical work undertaken by the organisation in this regard. Graham has been running the on-going research undertaken by the Trust (along with the Peters Keenahan and Walsh) on the gabled house and I was particularly taken with the images of survivals in Drogheda. Graham is to be thanked along with Geraldine Walsh, the CEO of the Civic Trust for organising the seminar.

And what's to become of this Billy on North King Street?

My own contribution ostensibly looked at the industrial aspect of the development of the Liberties and Smithfield, however it was difficult to resist throwing in a few slides of excavated house plans, the earliest of which did not sport the classic corner fireplace and heavy chimney stack which more often than not had a structural function effectively tying in conjoined houses. I tried to get the message across that archaeological sites must be considered in a similar fashion to the way we look at the Dutch Billy: excavations chart the occupation of sites that are constantly in a state of flux; it is rarely possible to state categorically that you are digging a specific moment in time. I hope I got across the importance of stratigraphy and material culture (especially that of the humble clay pipe), when dating structures of the seventeenth century and later.

James Kelly, a Smithfield-based architect took up on this point by examining material culture through the eyes of the Dutch Masters. His point regarding the depiction of kitchen spaces was a well-made one: there is a world of difference between the kitchens of the 1660s and those of the 1740s; time certainly does not stand still. I was taken by his comparison of Malton’s depiction of the old Custom House with that of Tudor’s and it must at this point be accepted, while mixing my metaphors, that the latter’s vision cannot be taken as gospel. Indeed, as pointed out by another speaker, the sketch drawing that Tudor based his Perspective of Dame Street on (the image used to publicise the seminar) is well worth a closer look. 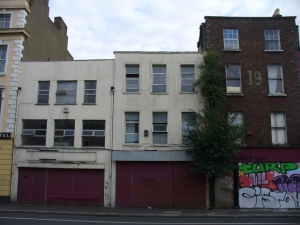 Ok, which of these structures on Thomas Street is a Dutch Billy?

Rolf Loeber needs no introduction from me. On several occasions when I’ve thought I’ve come across something significant (the Jesuit noviciate under Mother Redcap’s in Back Lane and the fine castle of Maghernacloy in Monaghan spring to mind and hell, anything to do with plantation studies at all), I’ve found that Rolf’s been there first. I’m waiting for him to emerge from the buddleia with a well-crafted article when I finally start digging the garden. His contribution to settlement studies and indeed his work with his wife Magda on architectural historiography and literary studies is overwhelming, as a Loeber bibliography will attest. Rolf posed the not unreasonable question ‘how Dutch were the Dutch Billys?’ and examined the form in its wider European context, referring to the medieval development of the gable and, to my mind at least, the inescapable conclusion that it’s fundamentally the continuation of a medieval form.

John Montague looked in some detail at John Rocque’s map of the city and its several antecedents. The accuracy of the plan on a city-wide basis was established on a grid related to the Ordnance Survey and again, one is always amazed that such a detailed impression of the city was put together in such a short period of time. The curmudgeon in me remembers however the large L-shaped structure Rocque depicts under the Iveagh Markets in Francis Street, one which didn’t appear on the archaeological record. Maybe he was detained by a passing Anabaptist?

Freddie O’Dwyer closed the seminar with some personal impressions of the form taken from his work with the various manifestations of the Department of Arts, Heritage and the Gaeltacht over the years. His images of No. 9 Aungier Street were instructive as were his impressions of the work undertaken by archaeologists (not this one) on the site of Speaker Conolly’s house Capel Street (a building depicted on Rocque in 1756, itself demolished by the Georgians several years later). It would seem the diggers were under the impression they were looking for the remains of St. Mary’s Abbey and ignored the evidence on the site for something perhaps as significant, though undeniably later. Yeah right, blame the archaeologists! Freddie ended his talk with a sketch he’d made the night before of Francis Place sketching his view of the city (published previously by Rolf) from a balcony roof in Drumcondra.  It’s taken until now to figure out where he was positioned when he made the drawing and it seems a bunch of architecture students in UCD worked it out. They should’ve asked an archaeologist…

So, where do we go from here? The seminar did something to clarify the conflation of the simple gabled structures that existed on Chamber Street with the more elaborate gables which surmounted the houses of the ‘middling sort’ throughout the Liberties and through the city. The gables of the more elaborate houses of the period were also discussed but I was left with Peter Walsh’s image of functional houses built for functional people, standing within busy cosmopolitan streetscapes populated by Quakers, Anabaptists and indeed the odd Catholic, with small industries incubating in the back plots: breweries, tanneries and conspiratorial combinations of clothworkers. 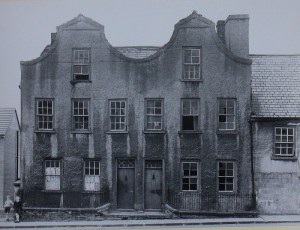 I've no idea where these are. I should've asked at the seminar

The next step is to get as many as these buildings as possible included on the RPS, a task which has been ongoing for several years without, it must be said, much success.

Where Eddie McParland took humorous umbrage at one speaker’s dismissal of the Georgian hegemony, it is undeniable that the architecture of the eighteenth-century continues to be prized above all else. It surely has to be recognised that the gable-fronted house (irrespective of the survival of its gable), must now be given due recognition by the statutory authorities before any more are lost? In this regard it was instructive to note that one speaker was completely off-message when presenting the governments’ (I’m including the previous lot here) policy on architecture. Maybe he was attending the wrong seminar? As one person said to me afterwards under the portico of the Bank of Ireland, ‘where’s the love?’…

The whole thing was filmed although I’m unsure if it will be available on the web. If it ever is, I apologise in advance for conflating keratin with ketamine: it was a long day. You’ll find more information on the Dublin Civic Trust at their website here: www.dublincivictrust.ie

This entry was posted in Historical archaeology. Bookmark the permalink.

One response to “Dutch Billys — the game is on!”